The first of two cases argued Monday, Republic of Hungary v. Simon, explored how courts should evaluate foreign-policy concerns in deciding whether to exercise jurisdiction over disputes involving foreign countries — and how much to defer to congressional choices in those decisions. Meanwhile, the potential ripple effects of the subsequently argued companion case, Federal Republic of Germany v. Philipp, loomed. 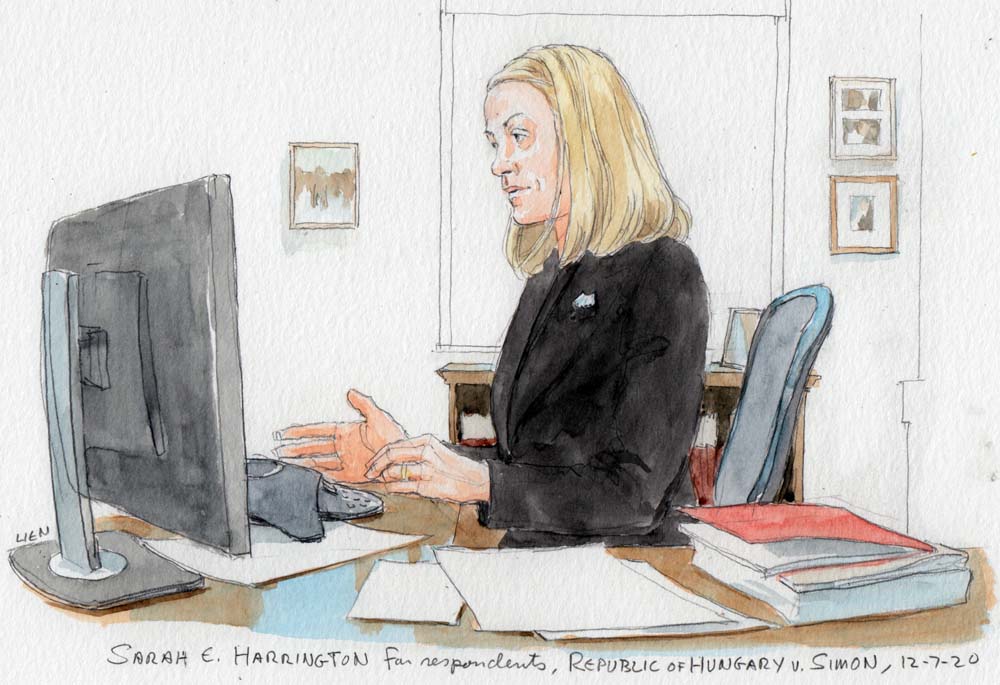 Hungary is a putative class action brought by 14 Jewish survivors of the Hungarian portion of the Holocaust. The survivors suffered a “wholesale plunder” of their property prior to the deportation and murder of more than two-thirds of the country’s pre-war Jewish population. Germany is a lawsuit brought by the heirs of German-Jewish art dealers. They allege that their ancestors were coerced into selling an art collection at a fraction of its value as part of broader Nazi art-looting efforts. The plaintiffs seek compensation from the governments of Hungary and Germany (and related entities), respectively, and argue that U.S. courts have jurisdiction to resolve their claims under the expropriations exception to the Foreign Sovereign Immunities Act .

Both cases present the question of whether federal courts – if they have jurisdiction – can nonetheless abstain from hearing the cases on grounds of “international comity” — a judicial doctrine under which courts show due regard for international duty and convenience, and due respect for the legislative, executive and judicial acts of another sovereign. But Germany also presents the issue of whether the expropriations exception gives U.S. courts jurisdiction to hear these sorts of claims at all. (A separate article analyzes the jurisdictional issue.) During the argument in Hungary, several justices questioned whether, if jurisdiction is found lacking in Germany, it is necessary for the court to reach the abstention issue in Hungary.

Attorney Gregory Silbert offered three reasons to reject the plaintiffs’ arguments that international-comity abstention is categorically unavailable in FSIA actions. First, the plain text of the FSIA deals with jurisdiction, but not non-jurisdictional issues such as comity. Second, Section 1606 of the FSIA provides that foreign sovereigns subject to jurisdiction must be treated the same as private litigants, but under the plaintiffs’ theory, foreign sovereigns would be subject to some lawsuits that would be dismissed if brought against private individuals. Third, other prudential doctrines, such as forum non conveniens, survived the passage of the statute, so comity abstention should survive as well.

Justice Clarence Thomas questioned whether comity abstention existed before the enactment of the FSIA in 1976 and asked if the court has the authority to create such new common law doctrines. Silbert argued that abstention existed prior to the FSIA. The problem pre-FSIA was that sovereign immunity determinations were left to the executive, subject to political and diplomatic pressures in individual cases. The comity doctrine, on the other hand, is easy for courts to apply: Courts simply ask whether a complaint alleges that foreign parties harmed other foreign parties.

Justice Samuel Alito asked whether Section 1606, which makes a foreign state liable “in the same manner and to the same extent” as a private individual, is not best read only to apply the same substantive-liability standards. Silbert responded that Hungary should win without Section 1606, because the language of the main FSIA provisions does not preclude abstention. But Silbert emphasized that the phrase “manner of liability” contemplates similar procedural rules for foreign sovereigns and private litigants, not only similar substantive rules. Silbert reiterated that the plaintiffs lack an answer as to how forum non conveniens survives passage of the FSIA if comity abstention did not.

Justice Elena Kagan asked about an amicus brief by Professors William Dodge and Maggie Gardner that argues there is no historical basis for a separate international comity, with all prior cases involving either immunity or forum non conveniens. Silbert pointed to The Belgenland, an 1885 case in which the court identified convenience and international comity as distinct bases for declining jurisdiction. Belgenland also stated that federal courts in the 19th century would seek consent of the foreign consul before exercising jurisdiction in cases involving foreign interests, consent that would account for the affront to the dignity of the other nation with a competing claim to jurisdiction.

Kagan wondered whether Hungary’s argument replicated the pre-FSIA days, in which executive-driven sovereign immunity determinations took an unpredictable “kitchen sink approach,” only this time in the judicial branch. Silbert insisted that courts would not be required to make foreign-policy judgments, only to recognize the risk of international friction when a lawsuit asserts claims by a foreigner against another foreigner. Justice Neil Gorsuch continued that exploration of the difference between the pre-FSIA “bedlam” and the regime Hungary urges. Silbert said that not abstaining, and instead applying federal or D.C. common law to regulate the conduct of foreign sovereigns, would entail inappropriate foreign-policy judgments that courts should avoid.

Justice Brett Kavanaugh asked if Hungary sought a bright-line rule — abstain where foreign defendants injure foreign plaintiffs in a foreign country. Silbert agreed that abstention is warranted in that scenario, unless other relevant facts and circumstances are present. When asked to clarify, Silbert offered a hypothetical involving a discrete piece of artwork on display in Washington, D.C., or a possibly liable U.S. party. When Kavanaugh later asked the same question of Benjamin Snyder, arguing for the United States, Snyder said courts also must consider the adequacy of the alternative foreign forum, balanced against any strong U.S. interest in the subject, such as a case in which the property is located in the U.S. He said district courts can perform this analysis, although they could seek input from the State Department. But the plaintiffs’ counsel later responded that the FSIA, particularly the expropriations exception, foreclosed that rule.

Arguments for the United States

Entering the case as amicus curiae, the United States agreed with Hungary that international-comity abstention is available in FSIA cases, but it did not take a position on whether abstention should apply in this case. Snyder began his argument by insisting that for more than a century, courts have been able to abstain from cases raising serious foreign-relations concerns. Nothing in the FSIA forecloses abstention, any more than it forecloses the similar case-by-case reasoning of forum non conveniens.

In the testiest exchange of the argument, Chief Justice John Roberts pressed Snyder on why the United States “has scrupulously avoided taking a position” on what the courts should do in this case and suggested that this argument would be the “perfect time for you to fill that void.” Roberts did not accept that the State Department lacked information to make a recommendation. Snyder shifted to emphasizing the United States’ broader interest in undoing the lower court’s categorical determination that courts may never abstain on comity grounds. Kagan later suggested that, by not taking a position on whether abstention is warranted in this case, “the State Department is expecting the courts to do the difficult and sensitive and — some might say — dirty work for you.” Snyder specified that the State Department was uncertain about a particular fact — how this case would proceed in Hungary were U.S. courts to abstain.

Justice Sonia Sotomayor noted that in enacting the FSIA, Congress took sovereign immunity issues out of the executive’s hands. She wondered if abstaining substitutes the judicial determination that a case does not belong in federal court for the FSIA-codified congressional determination that it does. Snyder replied that all abstention involves a court declining to exercise jurisdiction that Congress has granted. But no conflict arises because courts do not abstain on grounds that “precisely replicate” what Congress wrote into the FSIA.

Arguments for the plaintiffs

Arguing for the plaintiffs, Sarah Harrington emphasized the United States’ foreign-policy interests in helping Holocaust victims seek justice — first by fighting in World War II, then by providing remedial mechanisms for survivors. Congress and the executive made it easier for survivors to recover on Holocaust-era claims. The position of Hungary and the United States would undo the primary purpose of the FSIA, which Harrington described as eliminating “ad hoc determinations about when courts should exercise jurisdiction over foreign sovereigns based on the foreign policy concerns of the moment.”

Roberts suggested that the plaintiffs’ theory would eliminate not only abstention, but also forum non conveniens and related judge-made doctrines for dismissing cases. He worried about the need for a safety valve to protect against the plaintiffs’ categorical position that the court must hear the case if the FSIA’s exception is satisfied. Harrington pointed to existing safety valves — including statutes of limitations, forum non conveniens, the political question doctrine and the act-of-state doctrine — which resolve most cases without the need for comity abstention. She also emphasized their fallback position — if abstention is permissible, it should be available only where the executive asks for a specific case to be dismissed, something that has not happened in this case.

Justice Stephen Breyer offered a hypothetical in which plaintiffs from Botswana sue the South African government in the United States over apartheid-era claims, and the South African government points to its Truth and Reconciliation Commission in asking the court to abstain. Breyer emphasized the foreign-affairs concerns presented by such a case, including reciprocity (that other nations would subject the U.S. to jurisdiction in their courts). Harrington reiterated that Congress incorporated comity-based decisions into the FSIA’s statutory requirements, and that the separation of powers requires respect for that legislative decision.

Kagan expressed concern for massive claims that might bankrupt a foreign sovereign. Harrington said it was too early in this case to make that determination, as the scope of the class and thus the scope of liability are unknown. And the United States can step in when necessary. Harrington argued that Hungary is different from other axis-allied nations in that it never provided a comprehensive or global settlement of Holocaust-era claims. This case showcases that difference — the United States asked the district court to dismiss claims against the Austrian-owned railroad (Austria did establish global settlements), but did not do the same for Hungary or the Hungary-owned railroad.

Silbert emphasized the reciprocity concerns affecting sovereign immunity. Everyone agrees, he argued, that “the worst injustices committed by the United States in the United States should not be decided by a Hungarian judge applying Hungarian law from a courtroom in Budapest.” For the same reason, an American judge should not resolve a Hungarian-based Holocaust dispute under American law in Washington, D.C.

The court agreed in Germany to consider the comity abstention question, but it was not a major point of discussion in that argument.

Responding to a question from Sotomayor, Germany’s counsel, Jonathan Freiman, agreed with Silbert’s earlier arguments for Hungary, adding that the court need not reach the comity question if it believes there is no jurisdiction under the FSIA.

Plaintiffs’ counsel Nicholas O’Donnell included comity in his opening and closing, but he received no questions on it. In his opening, he adopted Harrington’s argument that “Congress has set the rules, and the court need not rewrite them.” Comity would “trample the FSIA out of existence,” he said. In closing, O’Donnell likened comity abstention to a baseball rule allowing an umpire to award a batter first base after he has struck out, “if the batter is important enough or really wants to get to first base.”

[Disclosure: Goldstein & Russell, P.C., whose attorneys contribute to SCOTUSblog in various capacities, is among counsel for Rosalie Simon and the other plaintiffs in Hungary v. Simon. The author of this article is not affiliated with the firm.]